Many people believe that Jesus Christ was born on December 25th, since it is the day on which Christmas is traditionally celebrated.

However, there are several arguments to show that Jesus could not possibly have been born on that date. Essentially, the date of December 25th was chosen simply because it was an already-established pagan festival that the church was struggling to suppress (see here and the post on Hallowe’en here).

The first argument against December 25th, and perhaps the best known objection, is the fact that shepherds would not have been out in the fields around Bethlehem at night in the middle of winter. Bethlehem is cold enough for snow in this season (see below). But we know that on the very same night, “in the same region there were shepherds out in the field, keeping watch over their flock by night,” (Luke 2v8). It is more likely to have been a milder time of year, like summer or autumn. 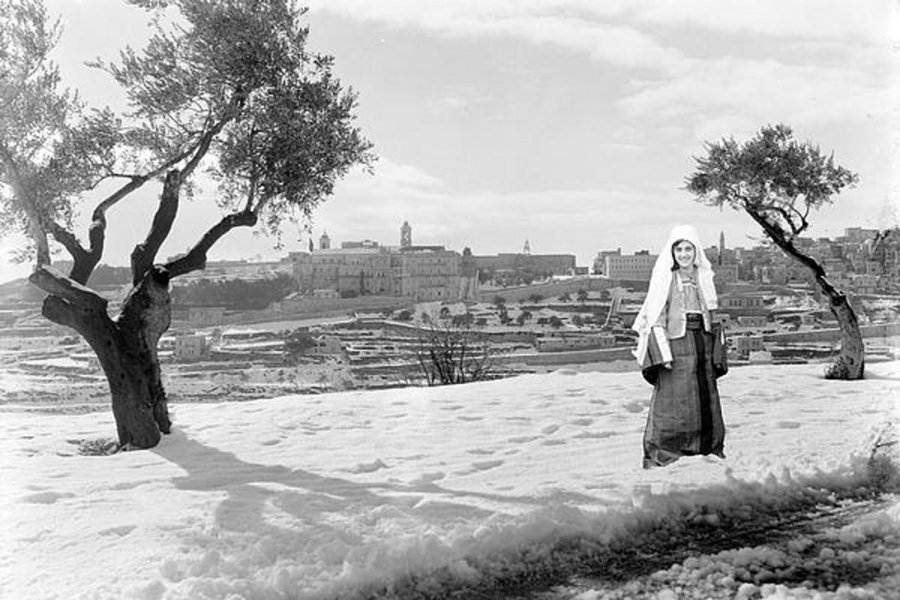 Secondly, we know that there was a Roman census at the same time, which meant Joseph and Mary travelling away from their home in the north at Nazareth, down south to Judea, “to the city of David which is called Bethlehem… to be registered,” (Luke 2v5). Again it is highly unlikely that the Romans would have organised for this to take place in the middle of winter, when travelling long distances was extremely difficult. Since Palestine was a mainly agricultural area, they would also have encountered many difficulties if they had tried to call the census during peak times of the farming year. It is more probable that the census was called after the harvest had been gathered in, some time after late summer, when agricultural work would have been slack and people would have been freer to move around. It also makes sense that the Romans would have tried to take advantage of a general upheaval in the population at feast-time to get them to go and register while they were ‘on the move’ already!

A third reason lies in the fact that there was no room at the inn where Joseph and Mary sought lodgings (Luke 2v7). In their desperation to find accommodation, they ended up in a stable, which means that the whole city must have been totally packed out. This was likely to have been at a time of religious festival, when hoards of people came to Jerusalem and the overflow towns around it (such as Bethlehem) would have been full as well. There were three of these occasions in the year: Passover in springtime, Pentecost in early summer, and Tabernacles, the feast to celebrate gathering in the harvest, in the autumn.  None of these happened anywhere near the middle of winter, but our autumn date is looking promising.

Finally, we have a dating system through what we know about John the Baptist, who was exactly six months older than Jesus. Elisabeth, John’s mother, gave birth three months (Luke 2v56-57) after the angel Gabriel appeared to Mary and told her “Elisabeth has also conceived,” (Luke 2v36), implying that this was the point Mary conceived too. We know that John the Baptist was conceived at another one of these three key feasts, a time when “the whole multitude of the people” (Luke 1v10) were gathered together. We also know that John’s father Zacharias was ministering in the Temple at the time, and he was on a rota system, “of the division of Abijah,” (Luke 1v5). 1 Chronicles 24 tells us that his was the 8th in order, and we know from the Jewish chronicles and the Mishnah (the ancient commentary on the Jewish Scriptures) that this rota began at New Year in March, and each priest ministered for a week, Sabbath to Sabbath. This takes us neatly to the Feast of Pentecost in May / June. See here for further explanation.

So John was conceived 15 months before Jesus was born (6 months + 9 months), again taking us to late September as a good estimation of the birth of Jesus, around the Feast of Tabernacles.

One more thing makes the birth of Jesus around this time highly appropriate. In John 1v14 we read the inspired words that “the Word became flesh and dwelt among us.” The word ‘dwelt’ is literally ‘tabernacled’, or stayed in a small temporary dwelling such as were used at the Feast of Tabernacles.

We cannot be certain about the date on which Jesus was born, and in many ways it does not matter – nowehere in the Gospels is the date specifically mentioned, Jesus never celebrates a birthday, and two Gospels don’t even tell the story of his birth. We should concentrate far more attention on what he said and did. But nevertheless, this exercise shows how carefully we must read our Bibles and not necessarily accept what others tell us to believe.