It was a sombre event, for the Queen had ordered a special funeral for one of her Prime Ministers – Margaret Thatcher. Everything was done precisely, and thousands flocked along the streets to see such a rare ceremony. Millions around the world watched it on their television screens. It was a never to be forgotten sight. 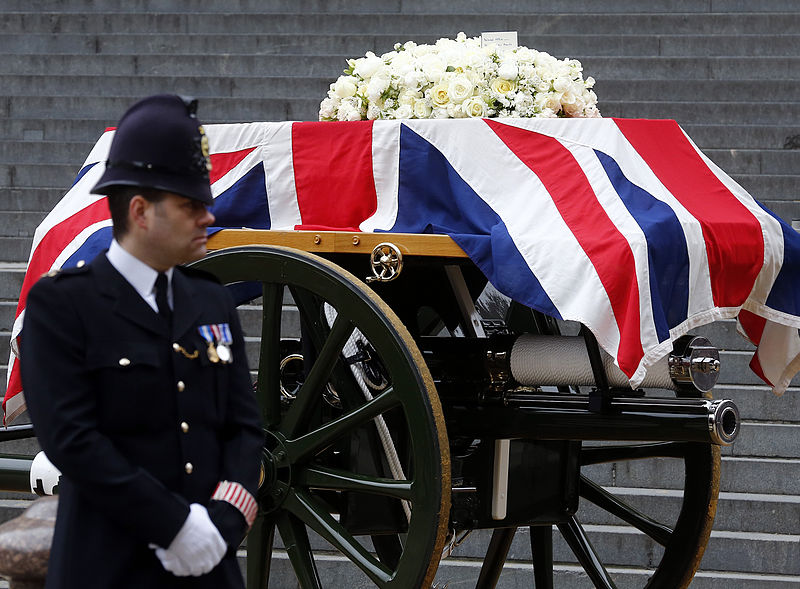 Later that day I thought about another funeral, this one attended by a much smaller crowd comprising family members and well wishers. The Lord Jesus had visited his friends Lazarus, Martha and Mary but unfortunately had to leave as violence was threatened from people in nearby Jerusalem. Then a message was received saying that Lazarus was ill but, astonishingly, the Lord did nothing, despite his great love for the family. As the Son of God, Jesus had unrivalled powers to heal the sick, but it was dangerous for him to return to that locality.

Nevertheless, after two days, Jesus announced to his disciples that they would return. The disciples were aghast and thought that a visit would be suicidal. When Jesus told them that Lazarus had fallen asleep, but that he was going there to wake him up, they all thought it best to let nature take its

course and believed that Jesus’ friend would get better after a good sleep. So Jesus had to explain just how serious the situation was: Then Jesus said to them plainly, “Lazarus is dead. And I am glad for your sakes that I was not there, that you may believe. Nevertheless let us go to him” (John 11:14–15).

When they arrived Lazarus had been dead four days, but there were still people mourning his loss. Lazarus must have been a man of some standing, or the family must have been well regarded in Bethany, for we read that “many of the Jews had joined the women around Martha and Mary, to comfort them concerning their brother” (John 11:19). When Martha heard that Jesus had come she slipped away to see him privately and what she said demonstrated her absolute belief in Jesus’ ability to heal: “Lord, if you had been here, my brother would not have died. But even now I know that whatever you ask of God, God will give you” (John 11:21–22).

The reply Jesus gave explains the true Christian hope of life after death. He did not say that Lazarus was better off where he was (in heaven), or that Lazarus was now looking down on them from above. This is what the Master said: “Your brother will rise again” (John 11:23). Here is an opportunity for us to compare our own understanding with Martha’s beliefs, for she was someone who had been taught by the Lord himself. This is what she said in reply: “I know that he will rise again in the resurrection at the last day” (John 11:24). Could we reply as she did? Do we believe what the faithful follower of Jesus believed?

There followed some words from the Saviour that have echoed in thousands of hearts from that day to this. Jesus had once said that the time would come when those in the grave would hear his voice and those who heard would live (John 5:25). Now he said this: “I am the resurrection and the life. He who believes in me, though he may die, he shall live. And whoever lives and believes in me shall never die. Do you believe this?” (John 11:25–26).

Have we sufficient faith to believe too? Does our understanding of Scripture accord with what Jesus was claiming, and is resurrection the hope we share, as the key to life after death? Martha had complete conviction, about both those things, as her words show: She said to him, “Yes, Lord, I believe that you are the Christ, the Son of God, who is to come into the world” (John 11:27).

Her sister Mary was then called, and she said the same as her sister, that if Jesus had been there, Lazarus would never had died. Clearly the sisters had shared those thoughts together many times.

The Lord looked around and wept. It was a touching scene and a reminder that Jesus was a man made in all points like us (Hebrews 4:15). However, his were not only tears of grief, for he felt angry that so many of his countrymen had not heeded his words, despite the wonderful signs he had given them. Instead their refusal to believe that he was their God-given Saviour meant that people would carry along a path that would inevitably lead to death and the consequent sorrow of those who mourn. But Jesus has come to remove that sorrow and to show us a better way, so he ordered that the stone that sealed the tomb be moved away. Martha was horrified, and said that as he had been dead four days his body would have decayed. But the Lord replied with such positive words: “Did I not say to you that if you would believe you would see the glory of God?” (John 11:40). Jesus prayed, then uttered a loud cry: “Lazarus come forth.”

The crowd must have fallen back with fear as the man that had been dead came forth, still wrapped in his graveclothes. Jesus said to them, “Loose him and let him go.” Surely Lazarus must have been filled with gratitude, and those who had witnessed this resurrection must have been amazed. But not everyone was pleased. Despite the magnitude of the miracle, the enemies of Jesus decided that they had to kill him, and Lazarus, for good measure (John 12:10).

The whole incident poses some question for us to ponder.

It doesn’t matter how small or how big our funeral procession is, as long as we go to sleep knowing that we have a positive faith, like that of Martha and Mary. No man can offer us such a free gift. We neglect it at our peril. But surely we will not turn away. There will be thousands praising God on that superb day when Jesus returns. Pray God that you may be there.